The True Story of the Sword in the Stone: A Compendium on the Life of St. Galgano

This is the first work of any length in the English language on St. Galgano, an Italian knight who gave up his comfortable life to become a hermit. One particular incident from his life is already known to English speaking audiences, though through entirely other means, namely, the medieval stories of King Arthur.

It may come as a surprise that there was a real sword in the stone, which may still be seen in Galgano, Italy. 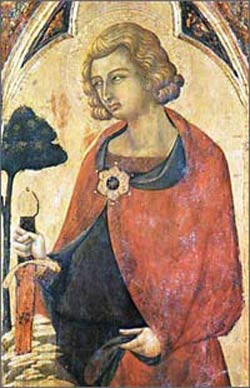 The sword in the stone, though a significant miracle in St. Galgano’s life, is but a divine confirmation of his calling to penance, prayer and sacrifice for souls, whereas in Arthurian legend it is centered around the establishment of an earthly

kingdom. This introduction into the Arthurian legend is late, around the 14th century, and most certainly has its origin in the story of St. Galgano.

This simple, straightforward narrative was written in the 19th century, and has been translated for the first time into English, so as to acquaint English speakers with this famous Italian saint.

The story traces St. Galgano’s life from his early youth and sinful years, his conversion, and the circumstances by which he became a hermit on Mt. Siepi. Then, the events of his holy life, his death and burial, as well as a description of what the abbey of St. Galgano looked like. The author, Galetti, even adds the testimony of miracles associated with Galgano’s head, a relic preserved in Siena.

Be the first to review “The True Story of the Sword in the Stone: A Compendium on the Life of St. Galgano” Cancel reply

The Life of St. Francis of Assisi