Vermeer: Christ in the House of Martha and Mary 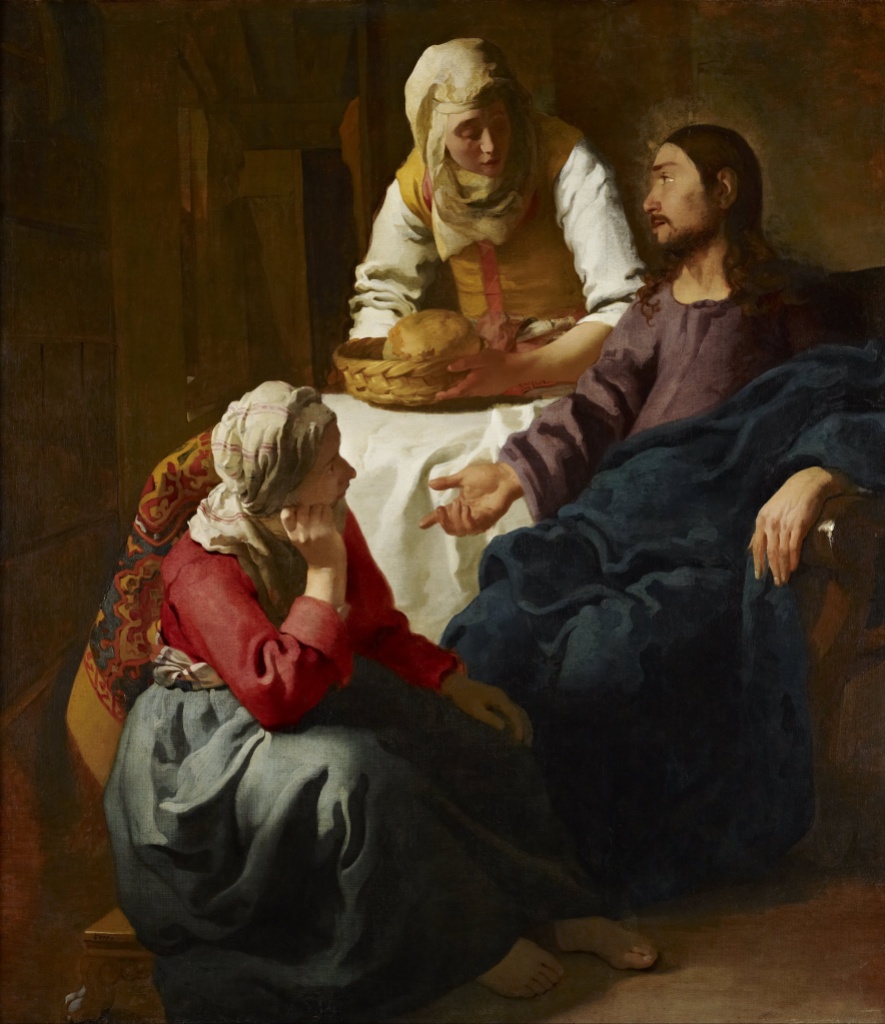 Christ in the House of Martha and Mary was painted in 1655-56, shortly after he was married. It is one of the earliest works to survive, and it is his only painting that is overtly on a religious theme. (In the future we’ll look at some other ones that recall biblical themes). The circumstances of the painting are not known, but it is thought to have been commissioned for a Church, possibly the schuilkerk in Delft. It is now in the National Gallery in Edinburg, Scotland.
One of the things we see is the placement of the characters. We have the conforming of the biblical narrative, with Christ seated and Mary Magdalene at his feet, but what is unique about this piece is Martha’s placement. Older images of this scene show Martha a pace or two back, calling out for Mary Magdalene to do something. This takes a different approach, and Vermeer shows off his theological sophistication.
Martha is not here voicing her complaint about Mary’s seeming inaction, when in fact she is in contemplation of Christ. Instead Martha is assisting and contributing to Mary’s action. The placement of Martha next to Mary and Our Lord is meant to show the unity of Faith and Works, with Mary representing the former and Margaret the latter. The reason older artists treating this scene, particularly in the Italian renaissance, would not have considered it important to include Martha and Mary together was that the reformation hadn’t happened, or else wasn’t an issue (or you took the other view, such as in anti-papal Venice). Tintoretto’s Martha rebukes Mary, while Vermeer, a Catholic living in a country where Catholicism is against the law, and the official view of the majority of those in government, as well as in Delft, a Calvinist town has the false notion of faith and works to contend with. The Dutch cultural scene emphasizes work, but outside of its context of faith. Vermeer draws a complete union between the two, as culminating in the blessed Sacrament.

Look at that loaf of bread. This is not just the fruit of windmills grinding flour, this is a symbol of the Eucharist, as the fruit of faith and works. Notice the lines of symmetry, a technique from Italian baroque painting that Vermeer employs several times. If we follow diagonally from the bottom left, we arrive at Christ’s hand, which is in many ways the key to the painting, since it occupies the central place if we draw a diagonal line from any side. Yet here should begin from the left, for in doing so we come not merely to Christ’s hand, but even more to his index finger and thumb. Immediately above the these two fingers we find the bread. These are also a priest’s consecration fingers, and so the Eucharistic symbolism could not be more clear.  By faith and good works we live a life by which we can partake of the Eucharist, which is the fruit of a work, united to faith, effected by Christ acting in the person of the priest.
While our Lord is depicted in traditional Holy Land attire, Martha and Mary are dressed like Dutch maidens, one who could be expected to embroider in the parlor, and the other working in the kitchen. It is a device to merge the ancient with the modern into one fabric, that Christ is relevant today, or, we might say contrary to certain churchman, the Gospel is relevant today. It might also be a criticism of others who name their home “St. Martha’s” to emphasize works over faith, as certain people today do, though we won’t name them. Thus, a commentary on faith and works is set perfectly in the context of Dutch art of the golden age.
Epilogue
Vermeer had limited success and seems to have been happy to work for a limited number of clients. In 1672 he went mad, and his life went down hill, until he at last died in 1675, leaving his wife and children with debts. Immediately he was more or less forgotten, until the 19th century when he was rediscovered. Part of the reason for this, and why he went mad in 1672, is because that year was the catastrophic year for the Dutch Republic, which was a world-wide empire. The French and English signed the treaty of Dover (although it was secret in England), by which Charles II promised to help Louis XIV at sea, and convert to Catholicism, while Louis supplied him a subsidy and invaded the Dutch Provinces. William of Orange ordered all of the dykes and levies broken, so that the ocean would flood the countryside and halt the advance of the Dutch troops. It did that, but at a cost. Fortunes and livelihoods were ruined, Vermeer’s savings were wiped out, and even his mother-in-law was going down financially, as were many people all over the country. Thus in the aftermath in 1675, the Dutch had forgotten about many more recent painters, as they were trying to survive the tragedy.
We will look more at Vermeer in the future.